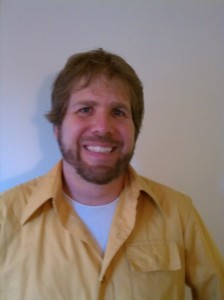 Remember this face?  Longtime Brookside residents will…it’s John Couture, former employee  of SRO Video.  It was so much fun to stop in that store, let the kids play with the rubber animals and browse the videos.  The staff was always friendly and knowledgeable.  SRO has been closed for a few years…but John is proposing an exciting new operation for Brookside–a craft beer bar/restaurant at the intersection of Gregory and Rockhill.

John met with the Armour Hills Homes Association board last night as the venue would be in Armour Hills at 120 E Gregory. He wanted to explain the concept, answer any questions we had  about his proposed operation and hear our opinions on a few issues.  Although it is the position of the AH board to not take a  position on  issues such as this, we all were impressed with John’s enthusiasm and commitment to being a good neighbor in Armour Hills.

The Bier Station will offer high quality craft beers for purchase and consumption on site.  John described it as a ‘tasting bar /bottle shop’ — similar to a wine bar, with international beers on tap and some packaged beer for take out purchase. He’s committed to partnering with locally owned businesses, such as Farm to Market Bread Company for the soft  pretzels.  Other menu items will include  cheese plates, sandwiches and desserts.  Capacity will be under 100 persons, proposed hours are Monday-Thursday 11am-11pm and Friday – Saturday 11am-midnight.  There will be a partially enclosed rooftop area, possibly some lighter live music, and a ‘contemporary and European art deco’ decor with long picnic tables to encourage conversation with other beer drinkers.  John  hopes  neighborhood residents to walk or bike to the Bier Station, welcoming kids too  as the parents stop for a cold brew.

The concept sounds great, something different for the area:  a casual, comfortable  place for beer lovers to grab a beverage, enjoy a light meal and chat with friends.  He promises  all  employees will know about the craft beers served, and which beers pair up with various menu offerings.  It’s not a done deal yet, though.  John is asking KCMO for a parking variance for the site (although he does have the ok from nearby Townsend Publications to use their parking lot evenings and weekends) and he is still working out a lease agreement with the landlord.  If all goes according to plan, the Bier Station will open in December.

John grew up in KC, is a Rockhill Gardens resident and a graduate of the Kaufman Urban Entrepreneur program.  And he is committed to not only providing a quality, service oriented establishment but promises to ‘always’ be responsive to any neighborhood concerns.  Even though I’m not a beer drinker, I’m always supportive of locally owned, neighborhood friendly businesses and look forward to welcoming John and the Bier Station  to Brookside!