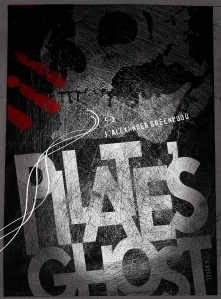 The third–and possibly final –book in this series  finds John on a book tour promoting his unusual experience at the fictional Cross College in Nebraska (the story behind the first book, Pilate’s Cross).  A mystery man threatens to kill him and his family as John deals with the aftermath of what happened in Nebraska. Pilate’s Key, the second book in the series, outlined John’s life in Key West with his then-girlfriend Kate and her daughter as he battled modern day pirates while writing about his experience in Nebraska.

Although each book in the trilogy has an element of mystery in the stories, these stories are not conventional mystery thrillers. The novels are more character driven with a mystery bent, not a ‘whodunit’ type of story.  And yes, there are some rather steamy sex scenes, especially in Pilate’s Key. Some of Greenwood’s favorite scenes in the new book involve banter between characters and the behind-the-scenes look at the media hype surrounding a book publicity tour.

Greenwood told me he is inspired by Brookside while tapping away at the keyboard. As he jogs through the neighborhood, various street scenes and personal encounters spark his imagination.

“Especially in autumn, Brookside has such an atmospheric quality. Have you ever walked down a Brookside street at dusk, with fire-colored leaves falling and a light fog hugging the street?” he said. “It always puts me in the mood for writing.”

I asked Greenwood who he could see playing the two main characters of his books, if Hollywood ever bought the rights to the novels.

“Since John Pilate is a sad sack kind of guy with sex appeal, I think a younger version of a John Cusack type would work well,” he said. “As for brainy beauty Kate, someone like Gillian Anderson would be perfect.”

When Greenwood “allows himself to dream” he thinks of selling his series for movie production—take the big bucks, like a Canadian author friend of his did recently. He would “relax for a bit and then start on a more mainstream type of fiction,” perhaps along the lines of Walter Kirn (Up in the Air).

“But the real reward is having readers–even if there are only a few–who enjoy the stories. Everything else is gravy,” he said.

For now, Greenwood is content with getting the word out to readers about the latest book. In fact, he’ll be on Channel 41’s “KC Live” show on Halloween.

Available on October 31, you can buy Pilate’s Ghost for $3.99 as an ebook on Amazon.com or in paperback from his publisher, Caroline Street Press (he will autograph copies and offers discounts for book clubs). Locally, Mysteryscape Books in old Overland Park carries all three books in the series. Check out the Pilate’s Cross website or Facebook page.  And if you are in a book club, Greenwood is happy to make personal visits to small groups to discuss the series.