Do you hear what I hear?  Finally…KTBG “The Bridge” 90.9 FM has a Kansas City radio signal!  Now we can listen to an intelligent,  non-commercial music radio station, targeted to adults, without obnoxiously loud  DJs playing the same consultant programmed music and spewing nasty sex chatter.  Tune in now as you read the rest of this blog!

In April, KCPT announced the purchase of KTBG from the University of Central MO in Warrensburg.  This week, the signal went live in Kansas City–although not currently at full strength.  The signal will improve over the next couple of weeks, eventually covering the entire metro area. The signal is great in my car but at this time, doesn’t come in the stationary radios inside our Brookside home.   Right now what you hear is automated, so it’s a soft launch to get you used to the type of music they will feature.  January 6 is the official kick off date with regular live programming. 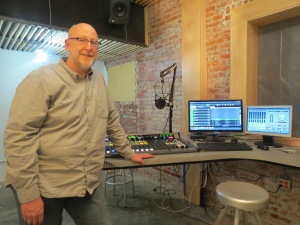 Jon Hart, at the control panel for The Bridge, 90.9 FM in Kansas City

The format for the station is ‘adult album alternative’, aimed at the 25-45 age group.  I’ve been listening since Wednesday, and have heard The Black Keys, Jackson Brown, Miles Davis, Jack White, Tracy Chapman, Bruce Springsteen, Mumford and Sons, Alabama Shakes and so much more.  It all sounds GREAT.  Jon Hart, who was the program director in Warrensburg, is now the station manager at the Kansas City studios, located inside KCPT.  He tells me the station will have a strong focus on local bands:  “Our goal is to make a tangible difference in the local community.  We have a bullhorn and we’re not afraid to use it”.  The DJs (who don’t actually play discs anymore, it’s all digital now) will have  areas of expertise in certain  music genres you’ll hear on the air.  The station will “reach out hard with local music” Jon says, and be very active in the local music scene and other cultural events. 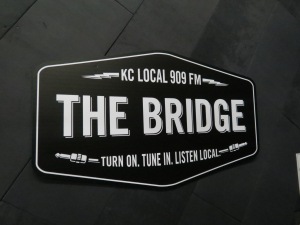 The Bridge 90.9 FM in Kansas City will emphasize local music

One of the most exciting features is the two live performance studios being built within the station.  The Bridge will regularly host bands (local and national) live on the air!    It’s almost like that small college radio station you listened to has grown up, inherited a decent budget and is ready to introduce you to a new rock oriented music scene again.

As for commercials…what you will hear are short, non-intrusive and straightforward messages from underwriters and sponsors, similar to what you hear on KCUR.  Yes, there will be fundraising as this is a non profit organization.  (I know you will enjoy this station so much you will be making a donation!)

Having The Bridge to listen to is especially thrilling for me as I was a DJ in my younger years.  This was in the late ‘70s and  ‘80s, when the station I worked  for (KLZR in Lawrence) introduced bands like The Police, The Clash, U2, Elvis Costello, REM, The English Beat, The Smiths, Depeche Mode etc to the KC market. I have some  foggy yet very fond memories of interviewing these groups as they came through KC on tour. I’m  older now but still love to hear new ‘alternative’ music, and just hasn’t been a  local station here that features the great new stuff mixed in with some older classic sounds.  You’re never too old to appreciate great rock music.  Now we have The Bridge–tune in and enjoy!  The link through this blog is to their temporary website.  You can also find them on Facebook, Twitter, Tumbler and Instagram.